Passing on the joy of Digital Making – Saral Tayal 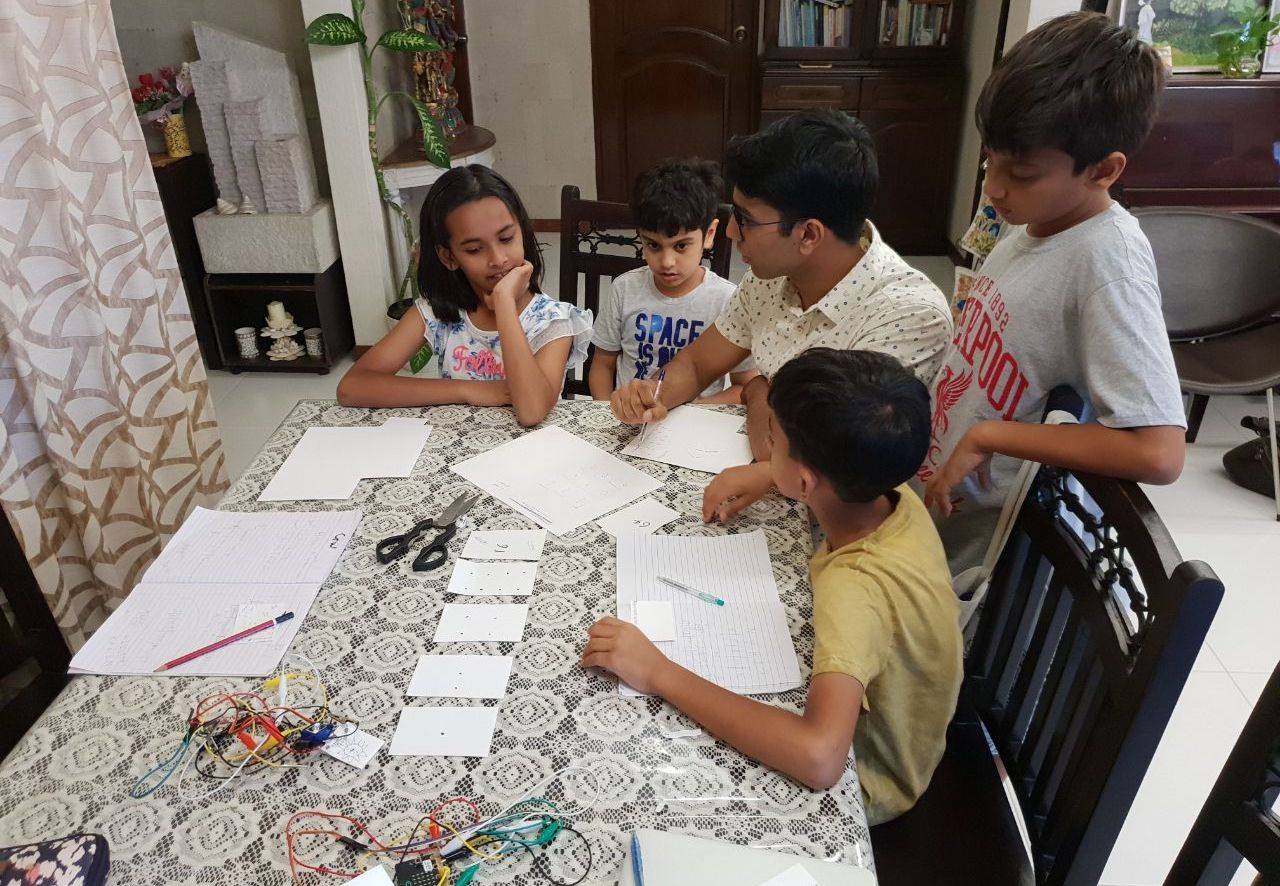 At just 19 years old, Saral Tayal has garnered a substantial digital making résumé, including an award-winning project and Microsoft accreditation for a course he created. As eager to share his knowledge as he is to expand it, Saral regularly conducts digital making classes for young students in his own home. We sat down with them to find out more.

Unlike most of his peers, Saral’s digital making path has been unconventional. Having studied overseas since he was 11, Saral would come home for 2-3 month stretches during the holidays. During this time, he participated actively in the local digital making community. He volunteered at the then-newly opened Makerspace@XPC, and pursued internship opportunities at several tech firms.

Although almost all of his colleagues were adults, they were accepting of Saral and guided him along, helping him pick up many professional skills. Privately, Saral also sought instruction from the internet, looking up digital making guides through online platforms like YouTube and Instructables. 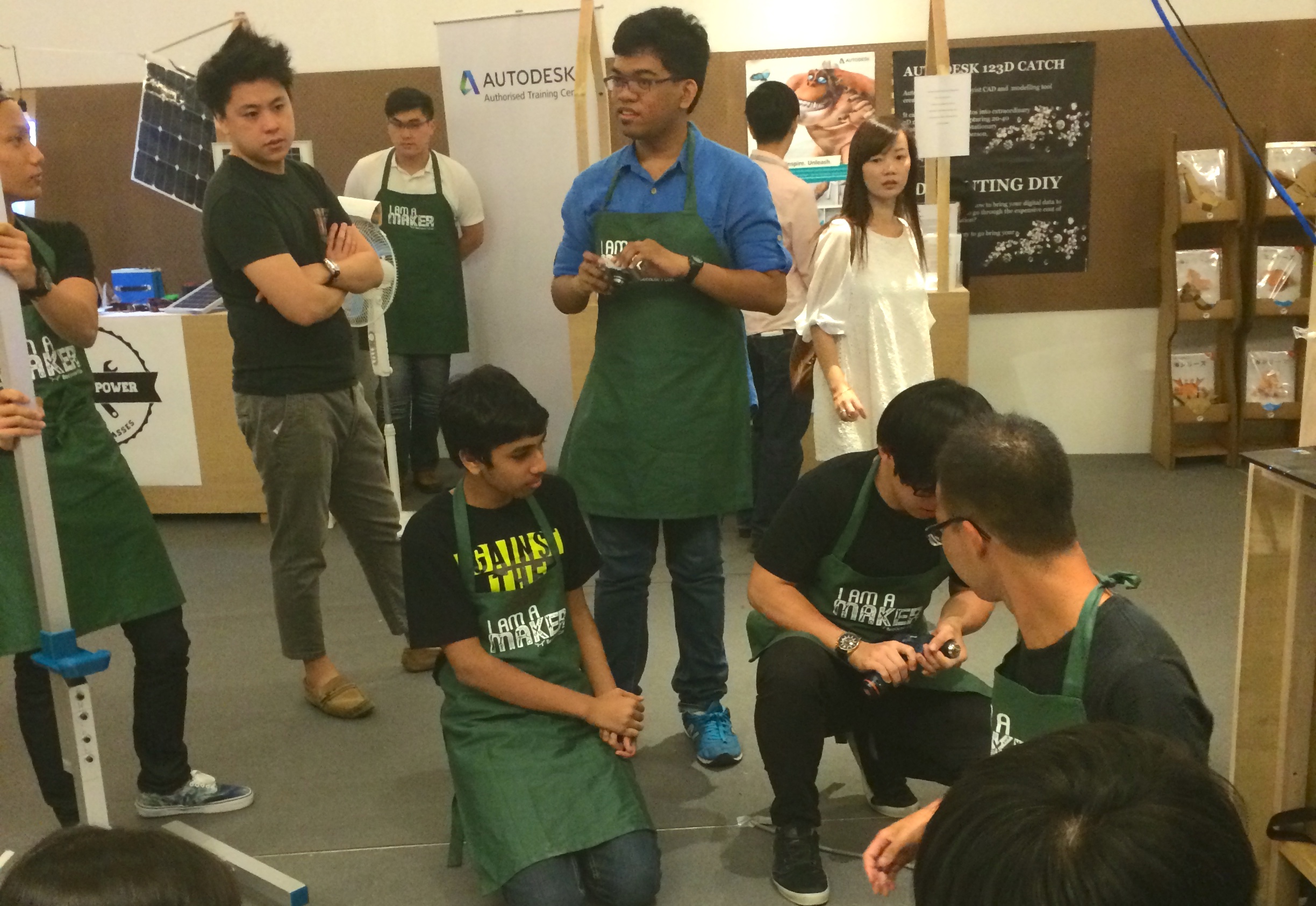 A young Saral (3rd from left) volunteering at Makerspace@XPC

From Student to Teacher

Although Saral enjoyed learning, it was not until 2015 that the thought of teaching occurred to him. He began to post some of his projects on Instructables as well as YouTube. These posts have been successful, with his Instructables tutorials garnering over 250,000 total views to date.

All the while, Saral’s digital making journey continued to push new boundaries as his ‘Smart Mirror’ project won first place for a competition on Instructables, netting him an Amazon grant and international recognition. Along with encouragement from people around him, this gave Saral confidence to start conducting classes.

Saral’s philosophy when conducting his classes is simple, “I have 2 main goals; make the kids feel empowered and let them have a good experience, so if in the future they want to continue learning digital making, they can look back to this good and positive memory.”

Saral understands positivity not in the sense that students have a completely smooth-sailing class, but in them having the satisfaction of overcoming structured difficulties. “There’ll be frustration when they encounter problems, but when they fix the issue there’s a lot more joy than if they were given the answers.” 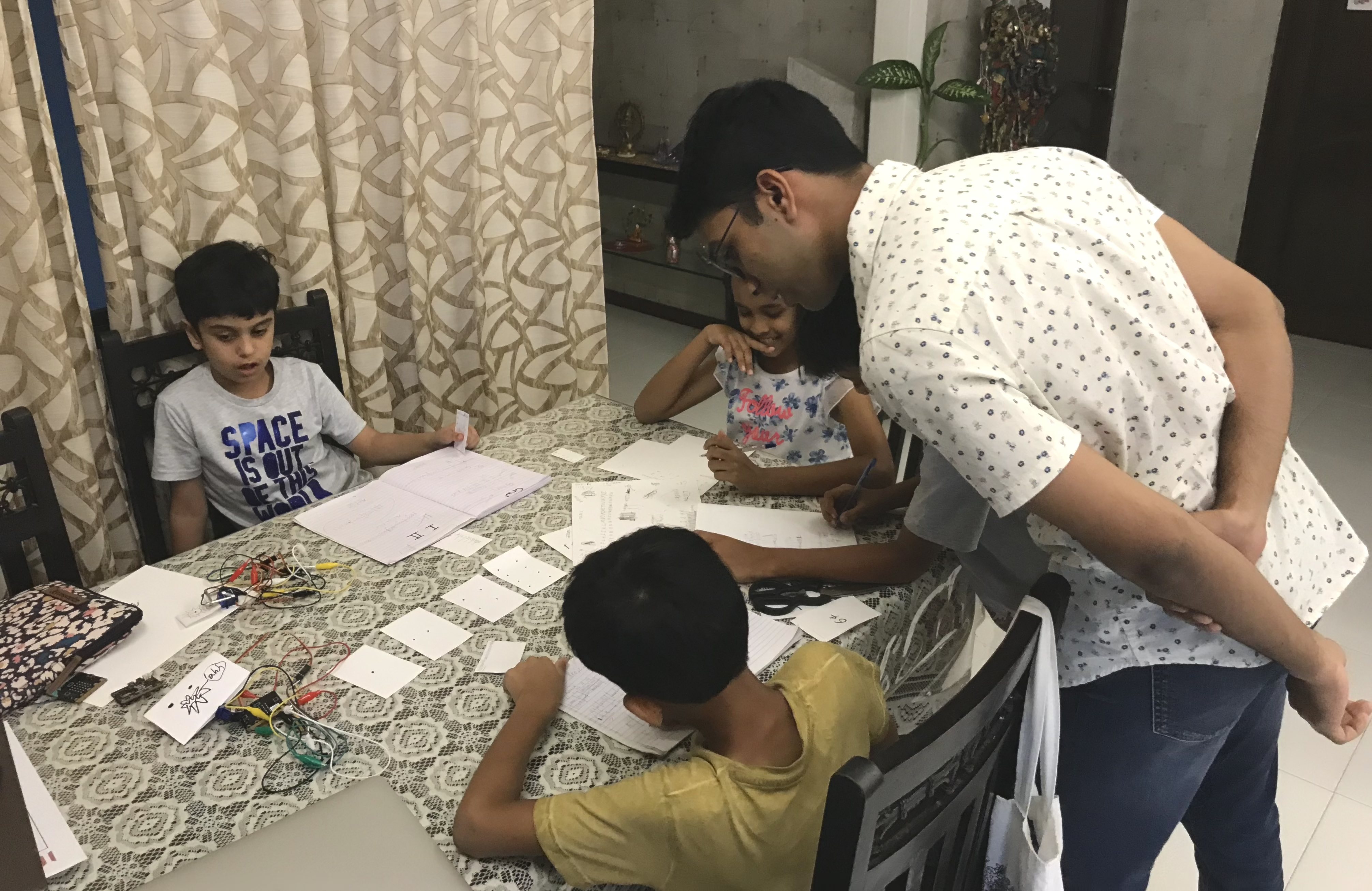 Hands-off: Saral sees the learning value in allowing his students to make mistakes

Moreover, Saral adds, “It’s important for the kids to learn how to problem solve, which is the core of computer science and computational thinking.”

“It’s [also] teaching you a bit of perseverance. Even if they don’t do computer science in the future, I hope these concepts stick with them.”

Sharing how he plans his lessons, Saral says the first two months cover the fundamentals of computer science that are necessary to begin building projects. Thereafter, he plans his lessons 1 month ahead, which gives him the flexibility to incorporate student feedback and suggestions regarding what concepts and projects should be taught next. 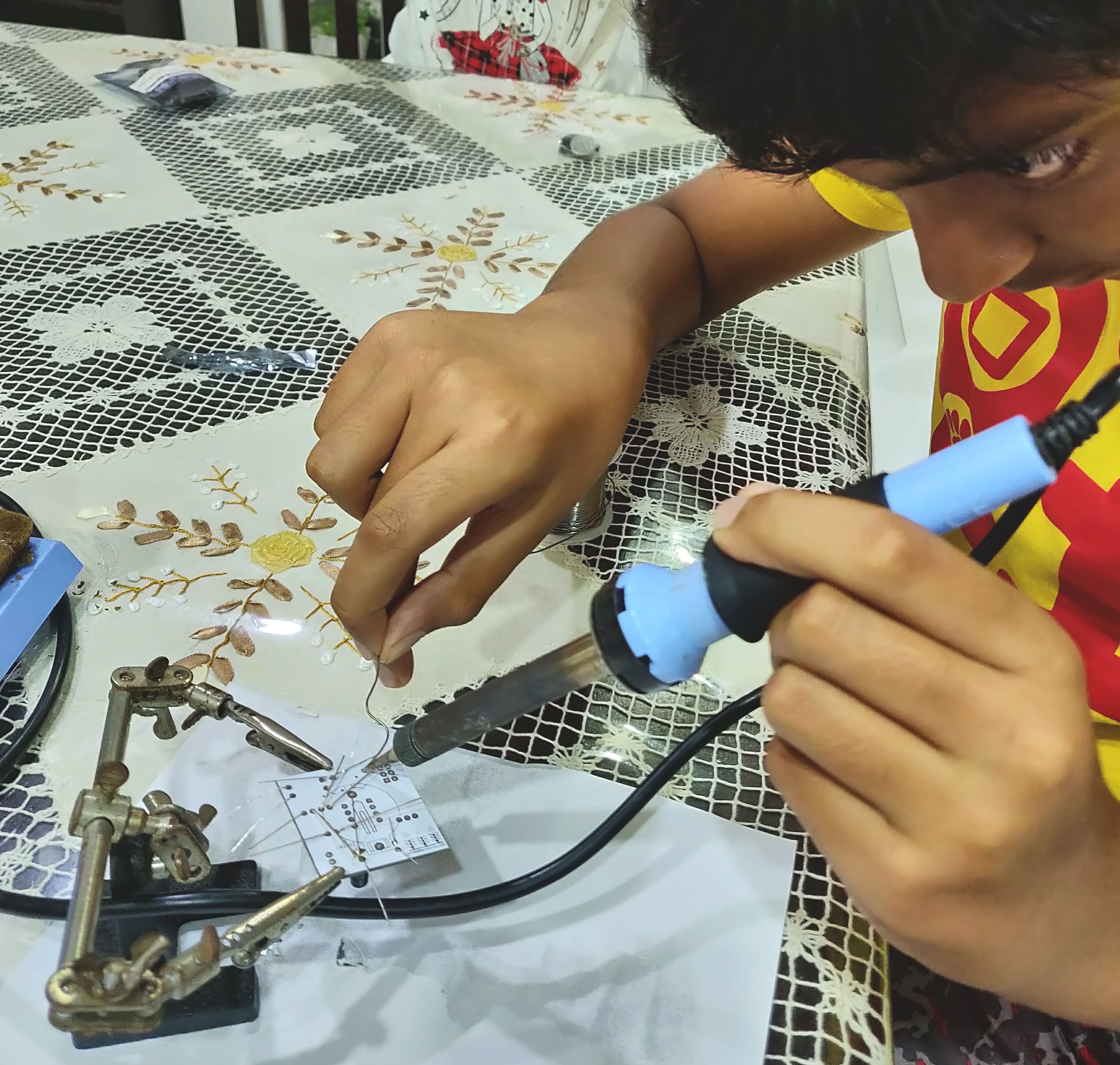 Students at Saral’s classes learn to use tools that they otherwise would not be exposed to. Here 12-year old Yajush learns to solder

Afterwards, he takes a hands-off approach to teaching, allowing them to make their own mistakes. “If they get on the wrong path, I allow them to proceed to the end, [because] that’s when they realize how they got on the wrong path and understand what went wrong.”

Saral’s students each have their own reasons for joining the class. Some, like 11-year old Anoushka were intrigued by the basic digital making taught in their schools and wanted to find out more. Others are more ambitious. 9-year old Aaditya sees the classes as the first step for his dream of becoming a gaming engineer, while 11 year-old Ahan aims to one day build the world’s first flying car! 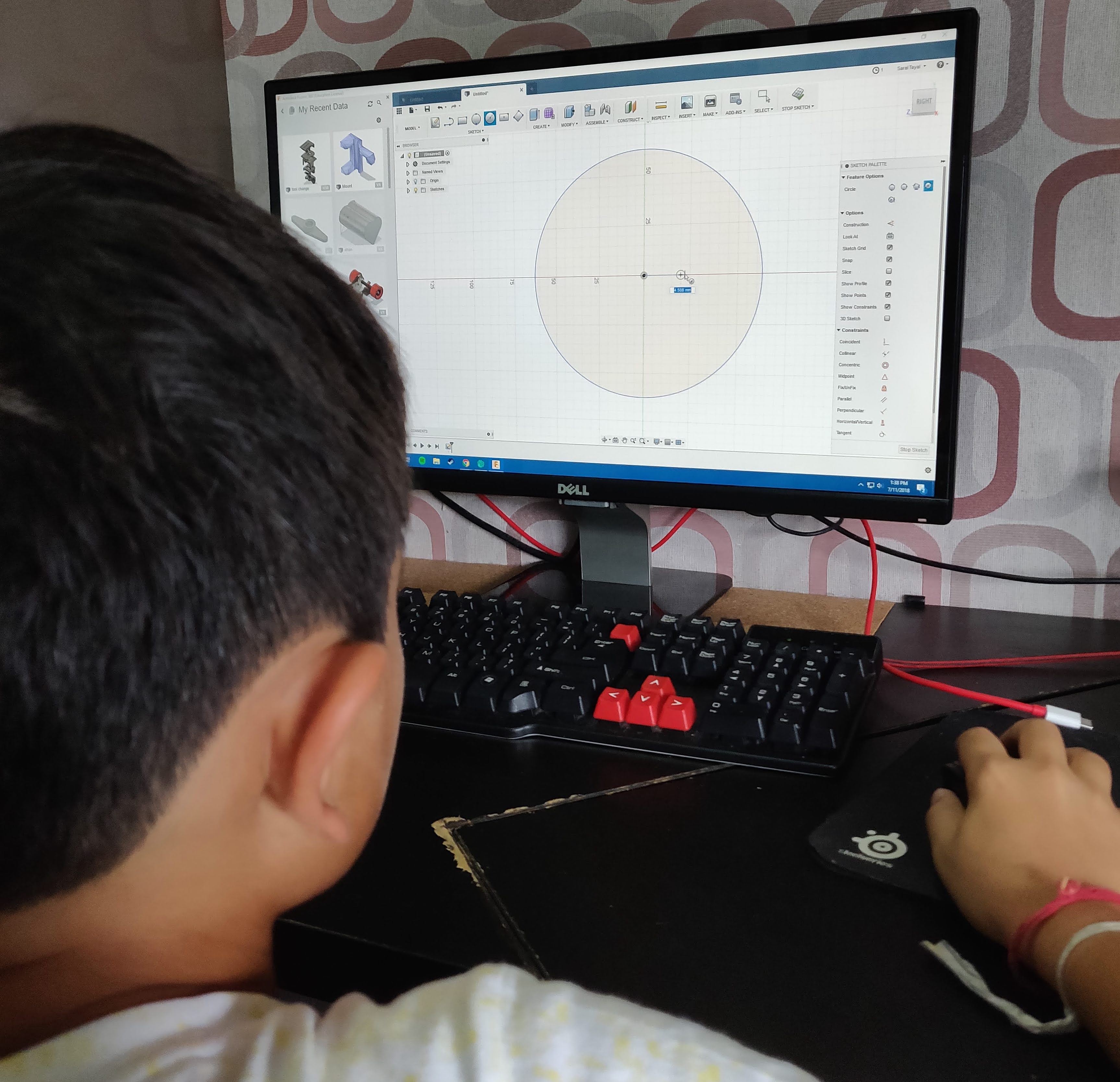 Not only are Saral’s students exposed to physical tools, they also learn to use digital tools such as this 3D modelling program

Even though their motivations vary, every student had only praise for Saral’s classes. 11-year old Ethan appreciates the more advanced content taught. “In school we just learn the basics and are not taught individually. But here, I am taught more advanced stuff and how to actually use it.” 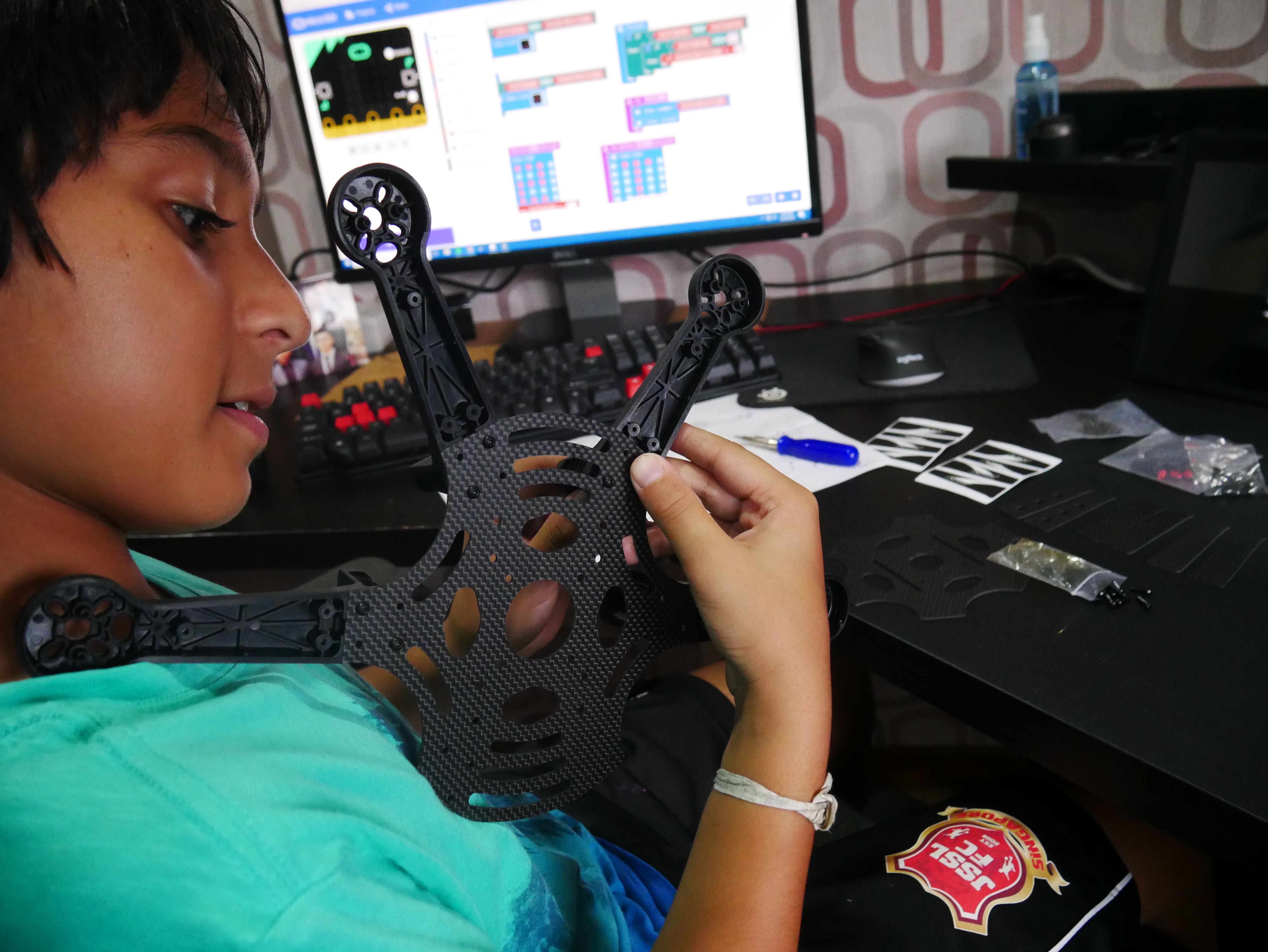 Under his watchful eye, Saral’s students have created many projects that they excitedly share with us. Ahan recounted the drone he built under Saral’s guidance, while Alisha and some other students talked about the ‘mega robot’ that the class collaboratively created. “[The mega robot] has a water sensor, if there’s water it will pull out an umbrella. When it’s hot and there’s light, it will drink a can of soda. The umbrella and [soda can] are 3D printouts from the computer. We attached a microbit to the robot’s face and if it’s angry its mouth will move up and down,” said Alisha. “It took us 6 classes to complete!” piped in Aaditya proudly.

Digital Making – More Accessible Than Ever

As someone who has contributed towards the nation’s push for digitization, how does Saral view the accessibility of digital making now compared to when he began?

“Much easier,” is his answer. Saral attributes this partially to the increased availability of digital making resources. “There was very little information out there [when I first started]” said Saral. “The libraries available were bare-bones and a lot of codes that I wrote were copied from online and pieced together.”

Another important factor according to Saral is the creation of the beginner-friendly micro:bit device, which has been widely distributed to schools island-wide by IMDA’s Digital Maker Programme. “Frankly, my life would’ve been much easier if I had the micro:bit when I started,” he mused.

“The block-based programming [of the micro:bit] is a huge factor that breaks down the scariness of text-based programming,” explained Saral. “The concepts are the same, but now it looks approachable and visually pleasing.”

To end off our conversation, Saral had some key advice, the first being to start with the end in mind. “It’s very important that people know where to start; they should have an end goal,” he said.

However, Saral also warns against diving headfirst into ambitious projects. “I think the most important thing is during your first attempts at making, you must have good successes with some easy projects. That shows you what you can do and makes you feel empowered,” he explained.

“Then, when you try harder projects and run into roadblocks, you’ll feel like there’s a light at the end. You’ll have the confidence and patience to learn from your failures.”

Lastly, Saral acknowledged to the community from which he owes so much of his digital making knowledge to. “Community is very important,” said Saral.

“Without other people helping you, you’ll really be lost.”

Saral and his students