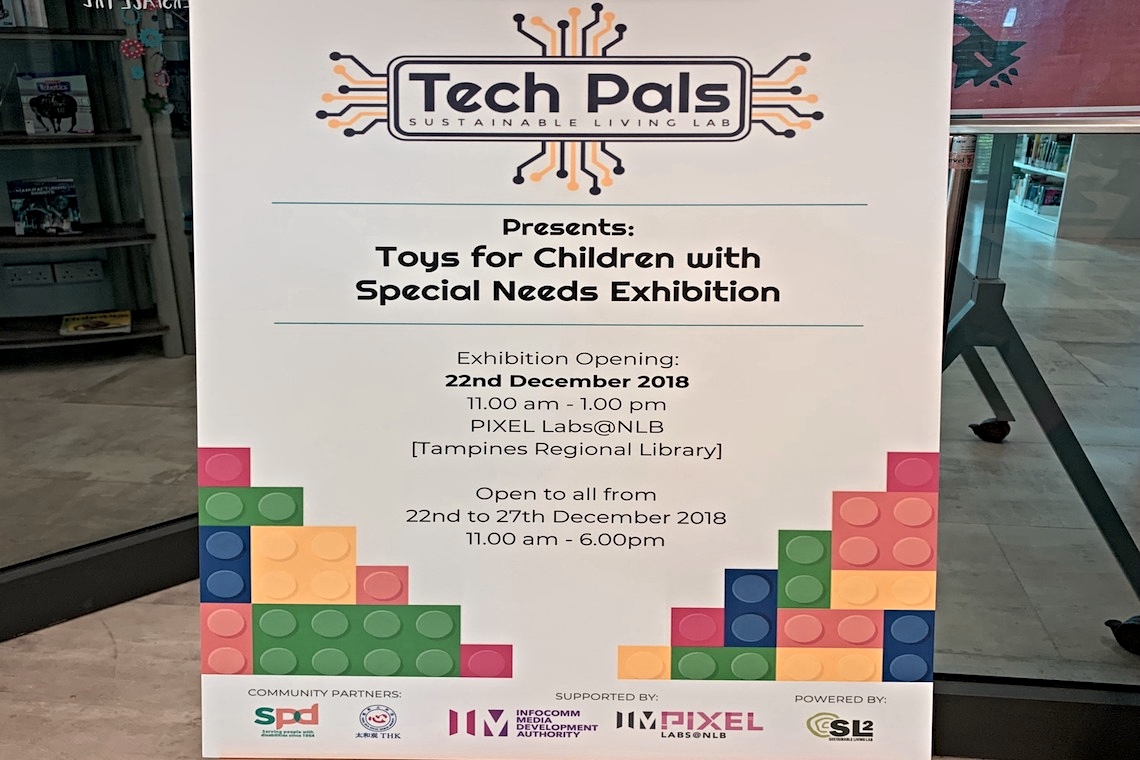 An initiative by IMDA’s Digital Maker Programme with Sustainable Living Lab, Tech Pals was a 8 week workshop that aimed to use Digital Making for a good cause. Not simply a learning workshop, where participants sit down for a micro:bit lesson or training session, the end goal was to come up with creative sensory toys for children with disabilities to play with that would help their developmental needs as well.

For two and a half hours every week, the Tech Pals gathered at the PIXEL Lab facility in Tampines Regional Library to learn about micro:bit programming and use their tinkering skills to design toys to help the beneficiaries. Here is what went down during those 8 weeks!

During the first session, the Tech Pals got to know each other as well as the Sustainable Living Lab partners they would be working with. They were also given a short presentation on the beneficiaries, so as to better understand their needs and be able to tailor the projects to serve them. Thereafter, the Tech Pals were broken into smaller project groups and introduced by the Sustainable Living Lab partners to micro:bit, and the essential skills they would need for the days ahead. 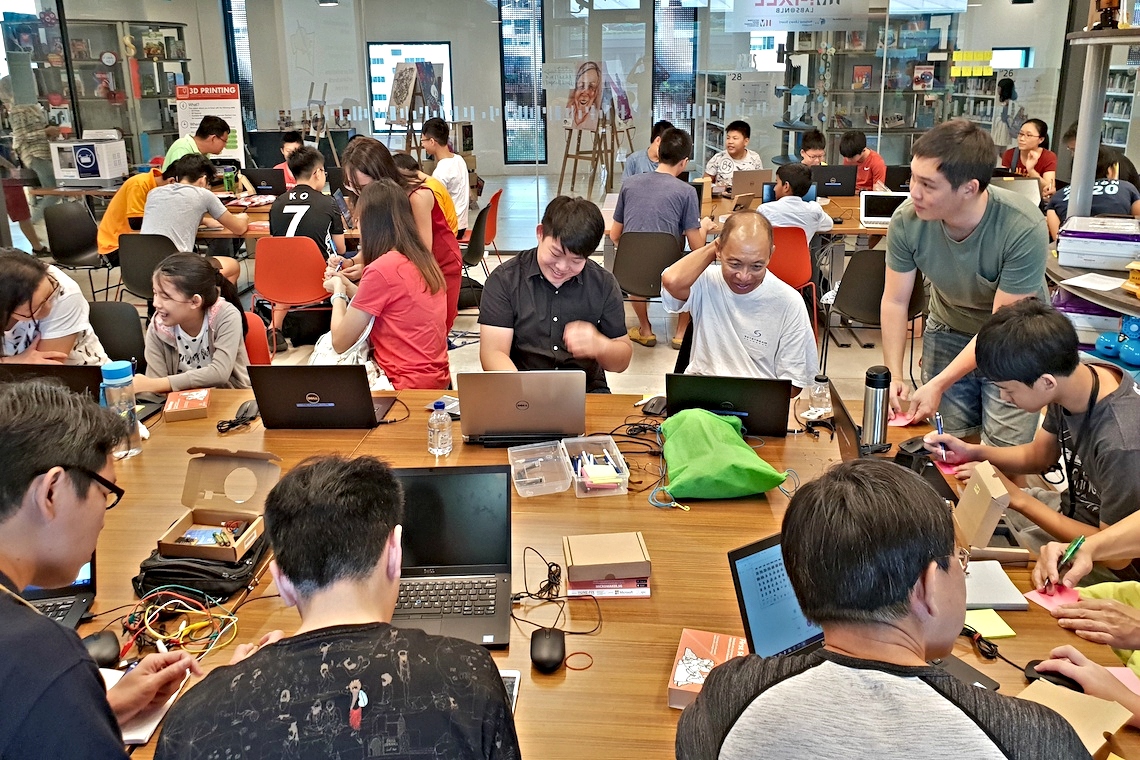 The first few weeks of the Tech Pals series also involved the different groups conceptualizing the toy that they wanted to build, given their understanding of the beneficiaries’ needs.

The Tech Pals were a mix of people of all ages and background, with young adults in their 20s, seniors, and young children. This varied cohort of individuals brought different ideas and skills to the table, which made the creative process fun, educational, and collaborative. 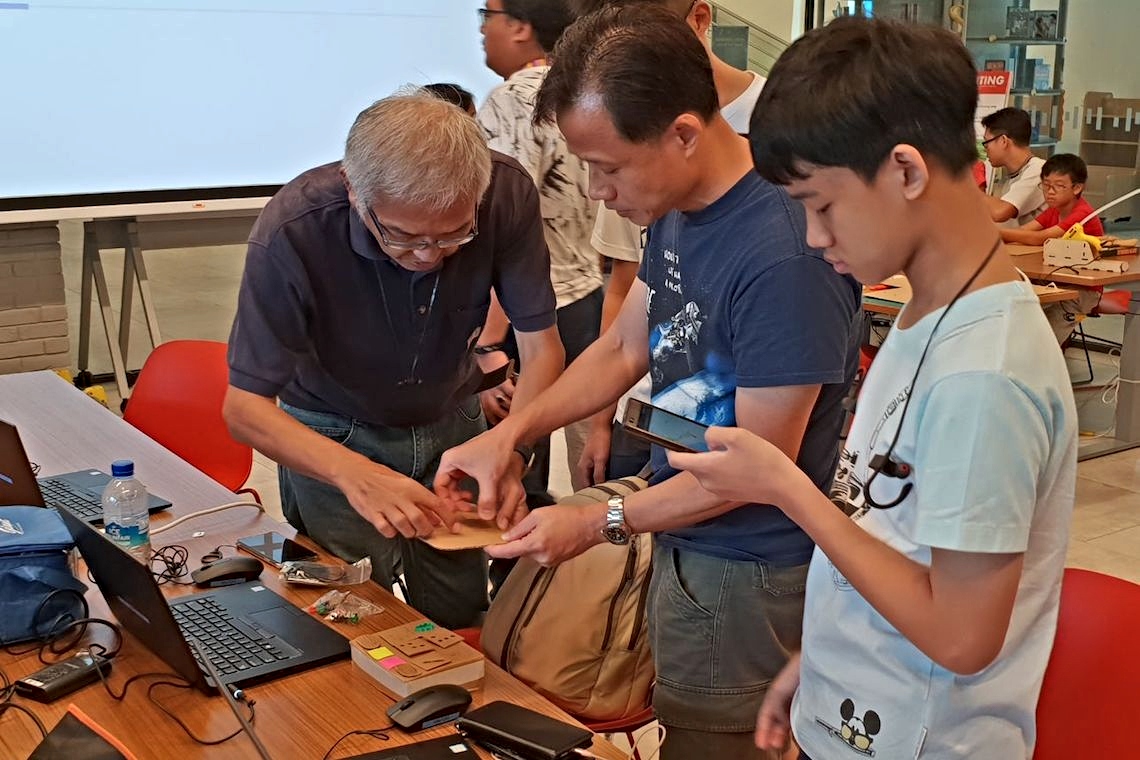 As each group chose to focus on a different type of beneficiary demographic, a variety of interesting project ideas began to take shape over this period. For example, some groups wished to develop toys for visually impaired children, and developed ideas such as a teddy bear with a Braille input system. On the other hand some other groups hoped to help children with movement impairments, and developed ideas such as a leg therapy soccer game.

After firming up their project ideas, Tech Pals built prototypes of their toys. They then focused on creating the necessary programming for their device to function. This was a challenging process for some groups, as the nature of their projects required more complex coding than was taught during the introductory lesson. However, through a combination of help from the Sustainable Living Lab partners, as well as the participants’ own resourcefulness, every group managed to figure out their projects’ required programming.

During weeks 6 and 7, the construction of the final products began. Some participants were so passionate about their projects that they came in on their own time outside of the weekly Saturday morning sessions to do additional work on their projects. 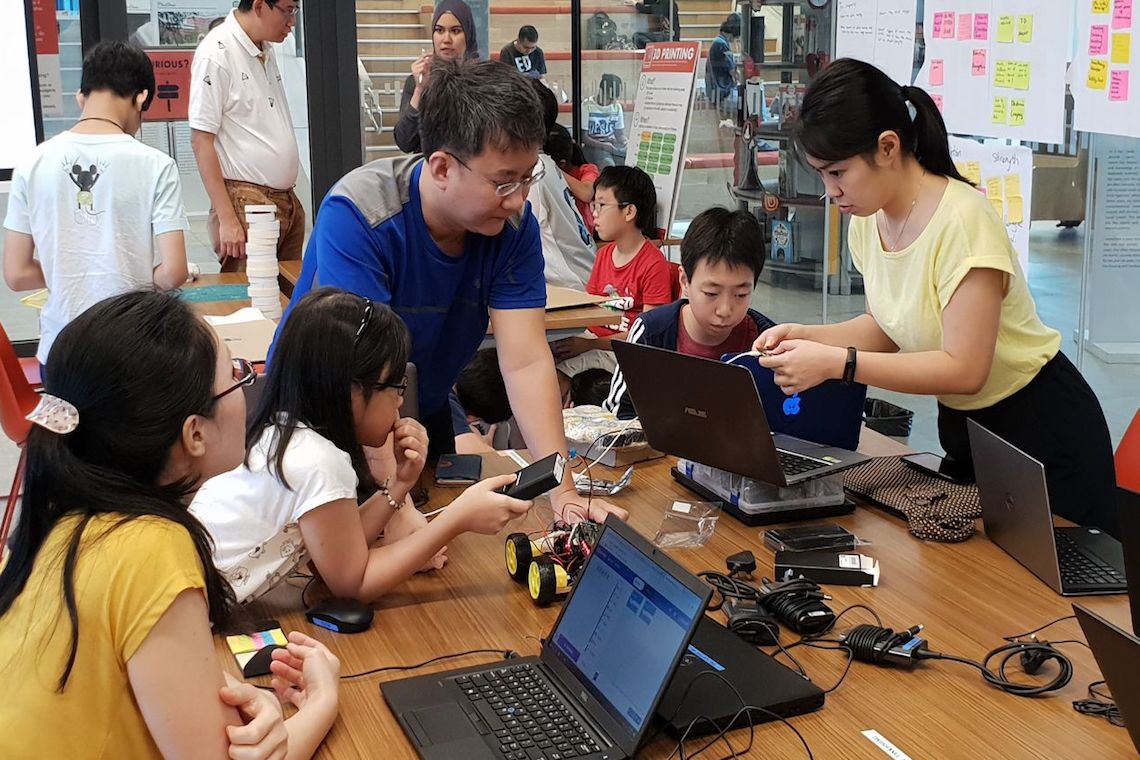 On the final week, participants held a public showcase of their projects. They presented their final products and held demonstrations to members of the public.

The final products were bright, vibrant, and fun. In addition, the functionalities were specifically designed to provide sensory developmental aid to children with disabilities. Here are a few of the products: 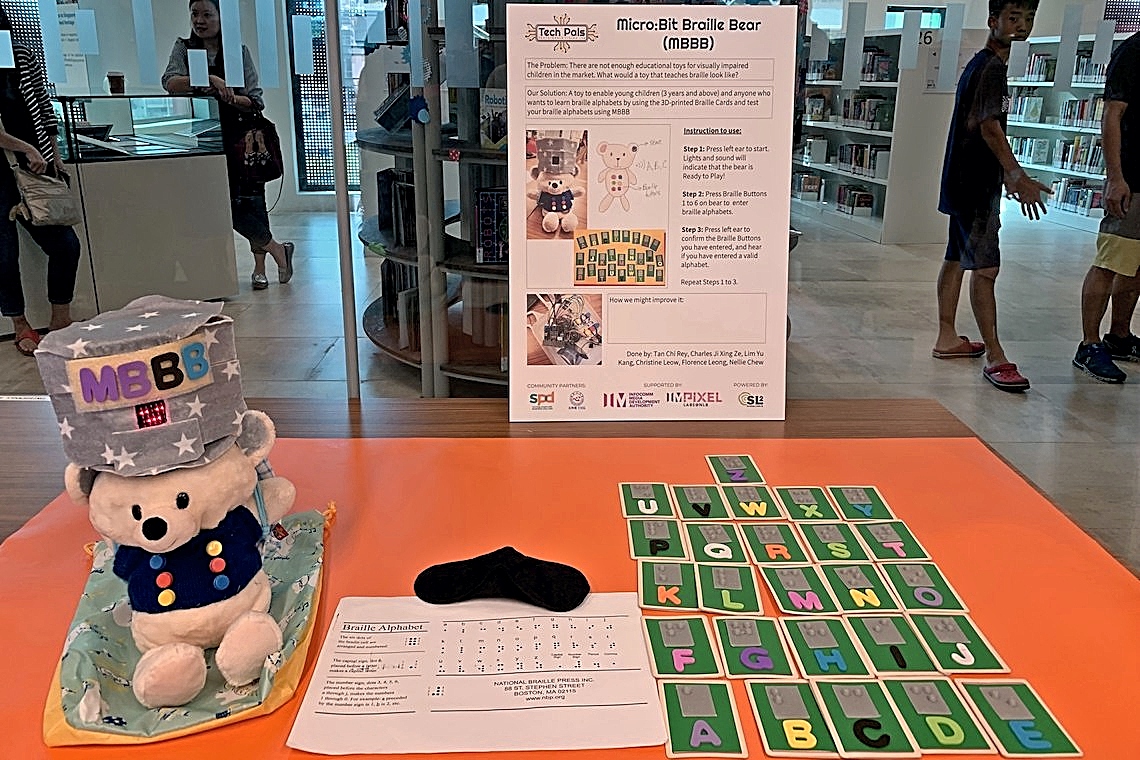 The Micro:bit Braille Bear is a teddy bear soft toy that helps children in learning the Braille system. The six buttons on the teddy bear’s stomach correspond to the six dots used in Braille. Depending on which dots are raised or flat, Braille users can identify letters of the alphabet. Likewise, if the user presses a pattern of buttons that correspond to one of the letters of the alphabet, the bear plays a sound information them which letter they have just entered. Otherwise the bear encourages them to try again. 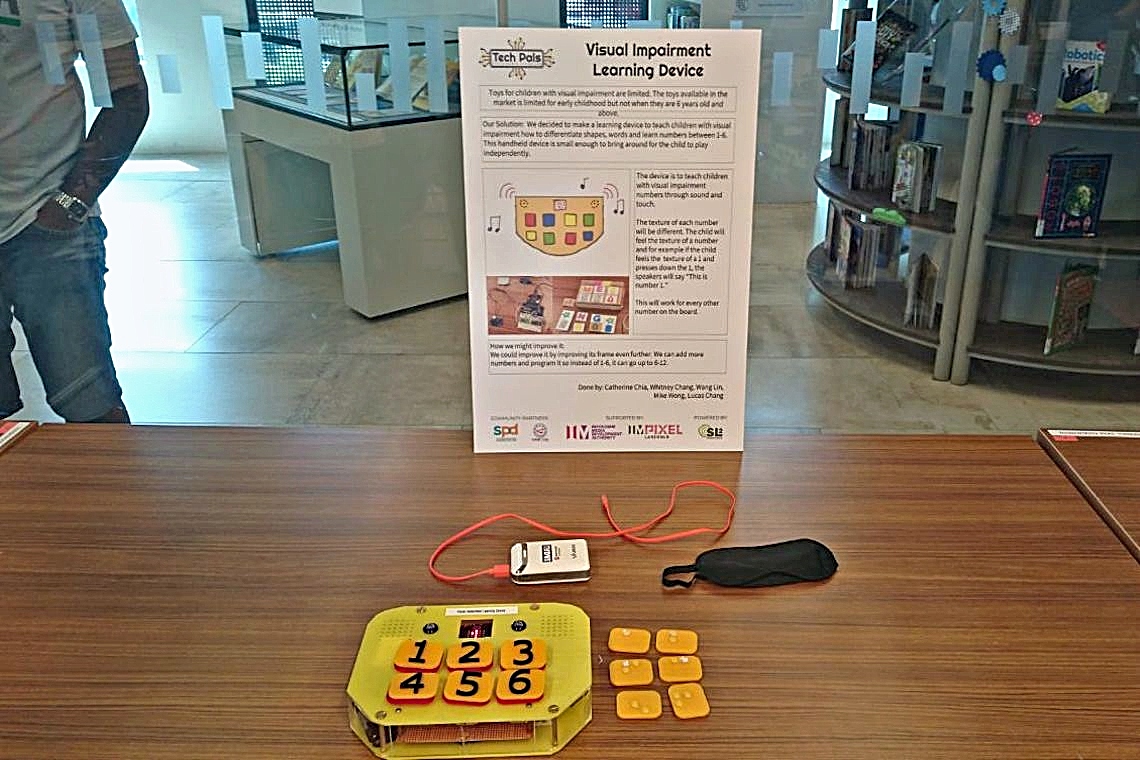 The Visual Impairment Learning Device helps children with visual impairments learn to identify numbers and letters by touch. They first feel out the raised surface of a button on the device. By pressing on the button, a sound plays informing them of the number or letter they have just felt. 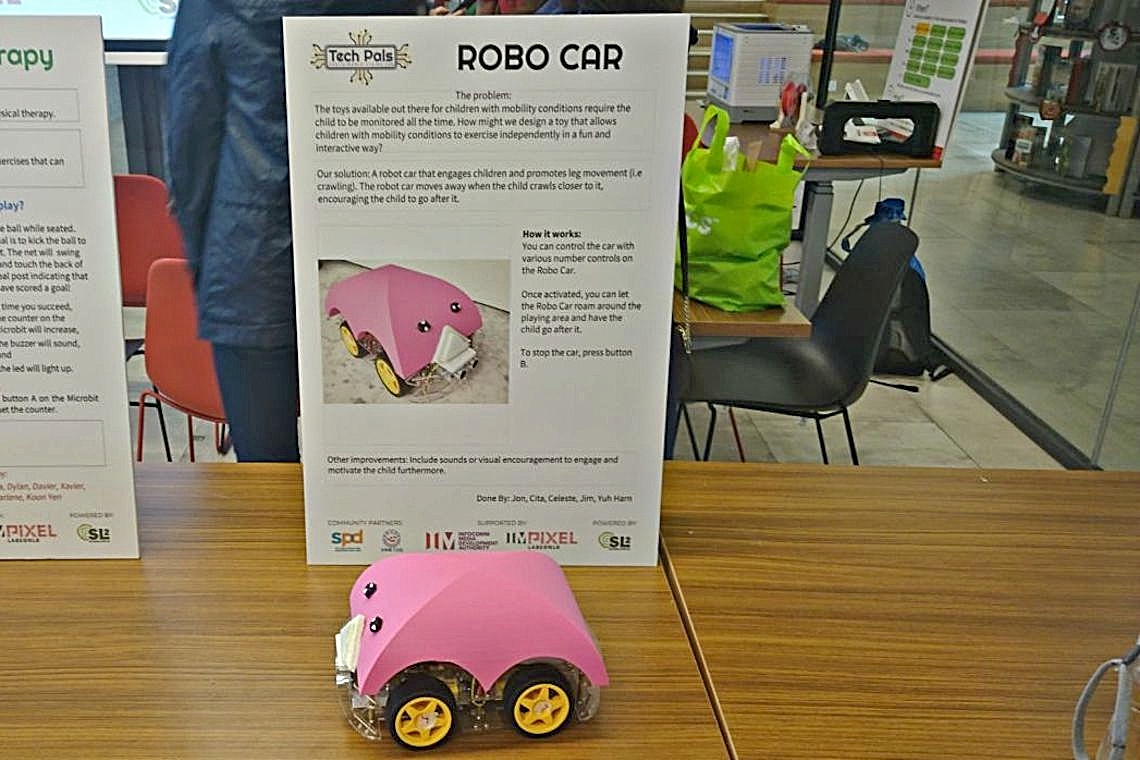 The Robo Car allows children with mobility conditions to exercise independently. After being turned on, the device senses if the child is close to it and moves away slowly, encouraging the child to move after it. 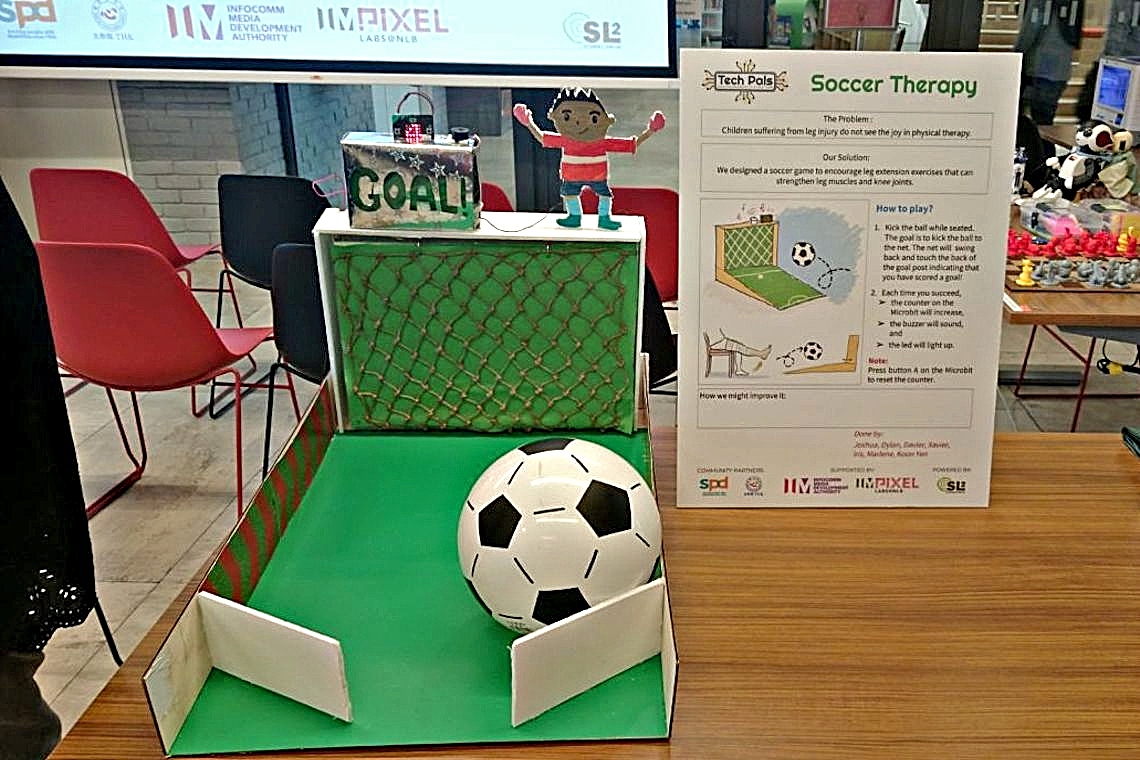 The Soccer Therapy device presents a fun way for children with leg injuries to rehabilitate. The injured child sits in front of the device, attempting to kick the ball with the injured leg into the net. If successful, a buzzer will sound and the goal will be added to the micro:bit counter display.

Throughout the 8-weeks, the Tech Pals showed that new technologies and skills, combined with collaboration, tinkering, and creativity, can be harnessed for the good of society, including its more vulnerable segments. During a sharing session on the final day, participants revealed that they found the process of working together to be extremely meaningful, as they were not only able to learn about new technology to help vulnerable members of society, they also developed and strengthened relationships with their fellow Tech Pals. Virtually all of them expressed a desire to participate again. 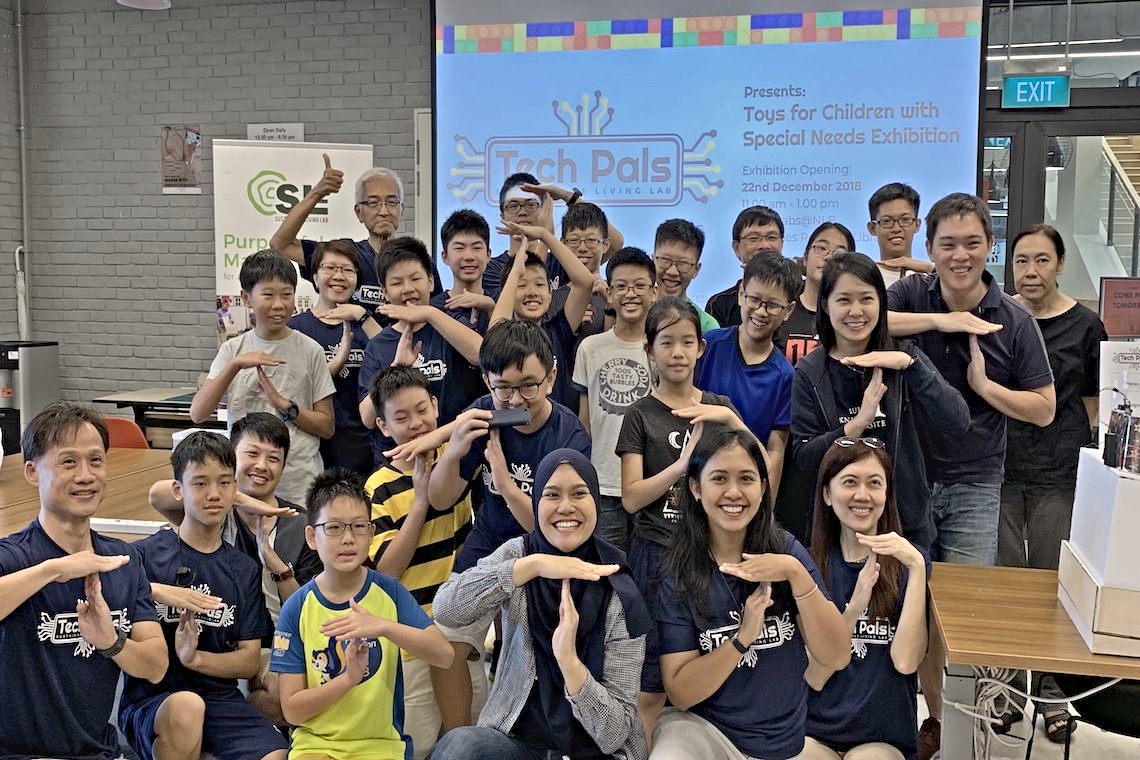 For more on Tech Pals, check out our video here!