Earlier in April, RGS Robotics carried out its CCA Values-In-Action (VIA) project during the school’s HUSH-STEM week — a special week dedicated to appreciating humanities and STEM subjects. As part of the project, we set up a booth on the topic of Artificial Intelligence (AI) with the aim of educating the general school population on the applications and implications of AI. We put up posters with information about AI detailing what constitutes AI, its limitations (e.g. the potential for AI bias) and the potential AI has to revolutionise the way we do things now. 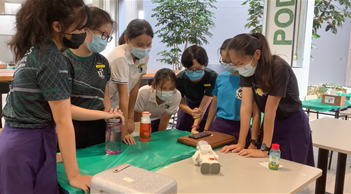 Reflecting on this event, the booth was successful in gaining the interest of the student body as many visiting students were engaged, asking questions about AI and were especially interested in the games that harnessed AI to run.

Joy Sim shared, “While we were managing the booth, we encountered issues such as the Alpha Mini robot running out of battery. Even then, we still had to manage the booth and attract the students to come. As such, we set the robot aside and let the students try out some AI-powered games such as Semantris! We were initially surprised by the participation rates but were glad that students were willing to learn more about AI!”

“As a member of the Robotics CCA, I am interested in AI and how such technology can be applied to our daily lives. This training has helped me make a connection between the theoretical benefits of AI and how AI in practice has both pros and cons. What especially intrigued me was the notion of AI bias. We often associate robots with words like ‘cold’, ‘unfeeling’ and ‘impartial’, but through the training, I learnt that even machines can have biases due to the way it has been programmed or the data that we humans train it with.” said Rebecca Sim.